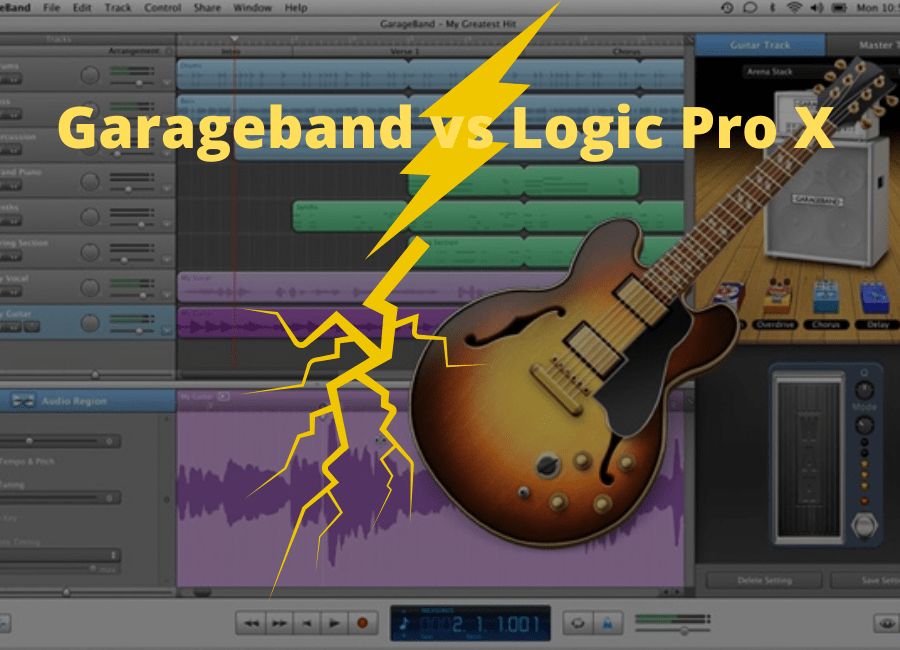 Both Logic Pro and Garageband may be thought of as having a similar foundation. When Apple bought Logic Pro in 2002 (back when it was still known as Emagic), the company decided to shape Garageband after Logic Pro. Apple drew inspiration from the functions of Logic Pro to produce a free alternative that is much easier. This alternative is a tool that is easy to use and great for learning the music composition’s ins and outs.

But despite their similarities, Garageband and Logic Pro are designed to meet very distinct requirements. There is a tool called Garageband available for Mac users so that they may quickly produce music with a simple interface. On the other hand, Logic Pro was developed specifically for more experience.

The commonalities between Garageband and Apple’s Logic Pro software.

It is essential to discuss the similarities between Garageband and Logic Pro before delving into the specifics of what sets these two programs apart from one another.

Both are only offered for use on Macs, have immaculate VST integration, have an identical interface, and operate in a manner that is virtually similar to one another. To summarize, everyone familiar with using Garageband should also be friendly with the fundamentals of using Logic Pro.

The primary distinction between the two applications is that Garageband is a (DAW) designed for beginners. In contrast, Logic Pro is a digital audio workstation (DAW) for professionals.

GarageBand is Apple’s attempt to get consumers interested in music creation so that the company can eventually sell them Logic Pro, an upgraded version of GarageBand. Apple’s goal is to sell as many copies of Logic Pro as possible.

5 Good Reasons to Switch from GarageBand to Logic Pro X

Logic comes with a vast number of new features; nonetheless, the ones listed below are some of the most important distinctions and additions:

The presence of a real Mixer in Logic is most likely the distinction that stands out the most to users. You can mix in GarageBand. However, the different components of a basic mixer are dispersed throughout the program.

For example, the fader and pan controls are located in the track headers, access to plug-ins is situated in the Smart Control system tab at the bottom, and there are only a few fixed send and return effect routes.

Subgrouping is a conventional method for structuring a mix and handling a collection of related tracks as a unit. This approach can be enabled by routing selected tracks via an Aux, such as all percussion mics or all background voices, among other examples.

Send and return effects allow for the parallel processing of signals. This is especially useful for effects like reverb, where it is common to have numerous reverbs in a mix that is applied selectively to various tracks.

This is great news for GB users who are starting to experiment with their mixes. However, parallel processing may also be utilized for other effects, such as parallel compression, which is a common approach. Additional Aux tracks can give versatility to the use of parallel compression.

Although Logic and GarageBand have a number of the same plug-ins, Logic contains a significant number of additional plug-ins. In addition, several plug-ins’ feature sets are considerably simplified or decreased in the Garageband version. Still, the Logic version has much more granular control and a wider variety of configuration possibilities.

An excellent illustration of this is the Compressor. While the Compressor in GarageBand only provides basic compression controls, the Compressor in Logic provides significantly more comprehensive options. It includes multiple emulators of vintage analog device compressors, each of which has its distinctive sound and response.

The same is true for equalization; while both GB and Logic include the conventional Channel EQ, Logic also provides a library of Vintage EQ models, which give more excellent analog “character.” To mention a few of the most prevalent processing tools, Logic’s reverb possibilities and settings are far more extensive than GB offers.

Regarding tempo and rhythm, Logic offers a far wider variety of options than GB. Unlike GB, Logic lets composers and songwriters with a more daring sense of adventure experiment with changing the song’s meter during the composition.

But the most significant new feature in Logic is called Smart Pace, and it gives users the ability to automatically or manually match the tempo of a project to the rate of an audio or MIDI recording, as well as the ability to adjust the playback tempo of audio to the rhythm of the project.

GarageBand provides some of these functions, like tempo alterations and audio ability to follow Project Tempo. Additionally, Logic has a variety of beat mapping methods, each of which might be useful in a variety of different processes.

For those ready to delve deeper into mastering, however, the entire control sets accessible in the Logic plug-ins are required to fully use those sorts of mastering processors.

This is expected to be the case with the typical GB user. Logic also contains extensive metering options for mastering, which are an absolute need for producing masters to be by the new loudness limitations enforced by most streaming providers.

The most important distinctions between Garageband and Logic Pro

Is Logic Pro worth the price?

A license for Logic Pro is something you should invest in if you already have some experience in the field of music production but want to push your skills to the next level. The advanced capabilities of Logic Pro are frequently subtle, but using them may make a world of difference if you regularly work on music projects.

Logic Pro provides access to a degree of information absent in Garageband’s interface. Because it does not overwhelm you with excessively sophisticated capabilities, GarageBand is an excellent choice for beginning your education in the fundamentals of music creation. But even though this is one of the program’s most notable advantages, it is also its most significant shortcoming.

Garageband is a great starter software for people who want to learn how to make music. It’s easy to use and has various sounds and instruments available. However, it doesn’t have some of the features that more advanced users may need, such as MIDI editing or automation.

Logic Pro X is a more professional software package with all the features you could need when making music. It can be a little daunting at first, but once you get used to it, there’s nothing you can’t do. It’s also worth noting that Logic has many bundled plugins that can save you money in the long run.